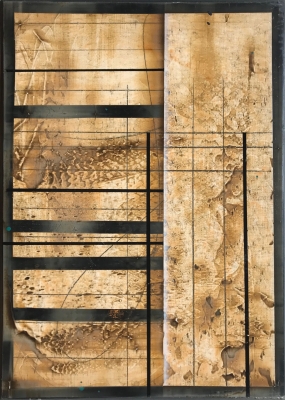 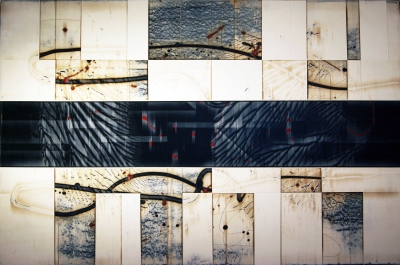 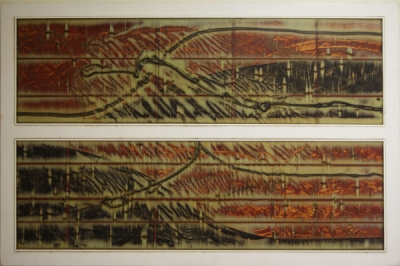 Michael Kessler makes nature-based paintings that merge geometric elements with biomorphism. He began his art career as a landscape painter. While still an undergraduate at Kutztown University Kessler received a fellowship from the Whitney Museum of American Art to study and produce art in New York City at the Whitney Independent Study Program. During this period (1977–78) he met many important artists working in New York City including Richard Tuttle and Dorothea Rockburne. Influenced by the paintings of Brice Marden and Elizabeth Murray as well as the music of Phillip Glass and Steve Reich he began experimenting with his own work. His paintings soon became fully non-objective. Kessler’s works are characterized by large fields of diaphanous color that are activated by organic linear structures that have been visually and physically woven into a grid structure, which consists of thick slabs of paint. These organic linear structures are overlapped and punctuated by dendritic growth patterns that suggest the bending of time and space. All of these visual elements as well as the color combinations have been carefully extracted from nature over time through prolonged observation and then reconstructed and orchestrated to transmit the dynamics of the Natural World. In this way Kessler synthesizes disparate elements into a new kind of harmony.

In 1991 after returning from a year in Italy (via. the Rome Prize) Kessler became very involved with large-scale, site-specific installations. Gallery owner Chris Schmidt (Schmidt/Dean Gallery, Philadelphia) worked with Kessler to initiate this project by obtaining a commission from Arlen Specter for Kessler’s first site- specific work which was installed in Senator Specter’s office at the Hart Senate Office Building in Washington, D.C. In Chicago Kessler continued this pursuit with Gallery owner Paul Klein who also got involved with the placement of site- specific works in his gallery Klein Art Works.

In 1993-95 Kessler taught art at Carnegie Mellon University in Pittsburgh.

To order any of Michael’s work please complete the form below stating Michael Kessler’s name in the message area and I will contact you as soon as possible. Or call Judy Ferrara directly at 1-574-276-6001.