Regular gallery hours:
open every day except Tuesday and Wednesday noon to 5 pm or by appointment.
Art openings have been put on hold due to COVID 19 but will resume as soon as it is deemed safe. New works are arriving regularly.

Gerard Stricher could be described as a conquering Expressionist for whom painting is what is to be conquered, free of any existential or social message. Never worn out, never overcome by the difficulty of painting, Stricher is tranquilly going his own way, revelling in the paint he generously spreads on the canvas. No advance plan here: freedom comes to him naturally, without ostentation. Improvisation here and there as inspiration chooses its moment, then a firm reining-in until the work is brought to a satisfactory conclusion. This can be a lengthy process: four or five (or more) reworkings at varying intervals before the desired result is achieved. A matter of finding the delicate balance between impulse and deliberation.

Meticulous play on matter and texture, chromatic saturation taken to its limits: Stricher’s man is defined as ceaselessly reshaping his precarious destiny in the face of forces beyond his control. In this respect the oeuvre is exhilarating in its emanation of energy. Caught up in the whirlwind of ever more beautiful canvases, we await their appearance breathlessly, as if hanging on the mounting magic of the final flourish of a fireworks display. — Laurence Izern

Josephine Haden, a nationally recognized artist is known for her signature take on landscape paintings. Her paintings take on a stunningly beautiful dreamlike and often surreal appearance. Haden studied art and art history as an undergraduate at Georgetown University and earned a master’s degree in art history from George Washington University.

Josephine Haden’s paintings are included in private, public, and corporate collections in the United States and France, including the William J. Clinton Presidential Library and Museum, Little Rock, Arkansas. Her paintings were shown in 2009 in a solo exhibition at the Virginia Museum of Fine Arts (Richmond). Her paintings were also selected twice for publication in New American Paintings juried exhibition-in-print: in 2008 by Jenelle Porter, Associate Curator, Institute of Contemporary Art, University of Pennsylvania; and in 2006 by Alex Baker, Curator of Contemporary Art, Pennsylvania Academy of the Fine Arts. Her work is featured in the exhibition-in-print competitions of Studio Visit (Open Studio Press,): in 2015 juried by Mary M. Tinti, Curator, Fitchburg Art Museum, MA; in 2012 by Trevor Richardson, Director, Herter Gallery, University of Massachusetts, Amherst; and in 2008 juried by Carl Belz, Director Emeritus, The Rose Art Museum. In 1989, she was invited to representing the United States, at the Grimaldi Château-Musée in Haut-de-Cagnes, France, for the 21e Festival International de la Peinture. 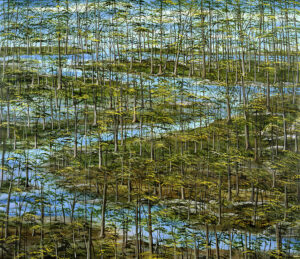 “Starting with landscapes, I found myself creating mysterious and distant places that hovered on the edge of reality. Filling the canvas with lush vegetation and dense forests, I played with scale and space while relying on a base ground of gestural abstraction. These landscapes evolved as I began to include figures and create scenes dealing with the contradictions and complexities of contemporary life where no one is real. Landscape is my springboard for presenting reality but my intention is not to create a naturalistic, symbolic, or site specific setting. And, if something appears to be happening in my painting, my intention is neither allegorical nor representational.” Josephine Haden