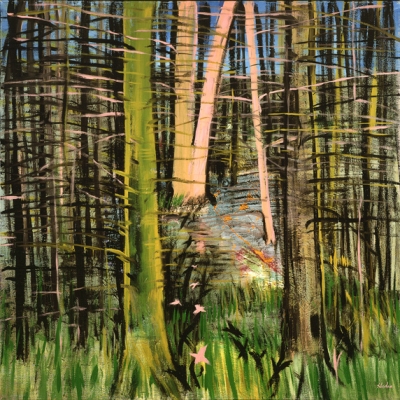 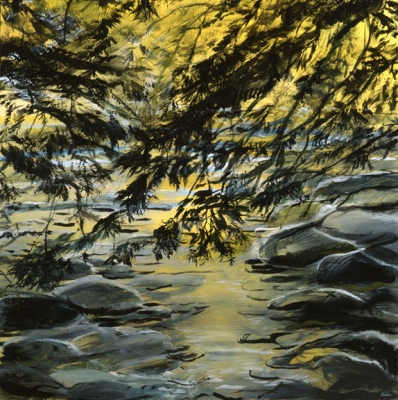 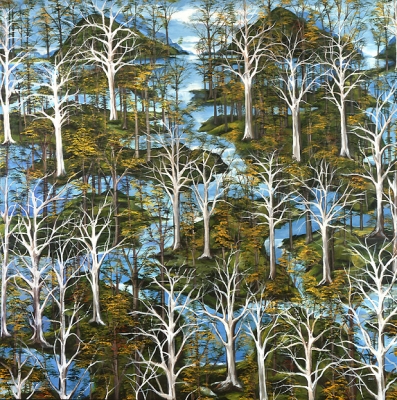 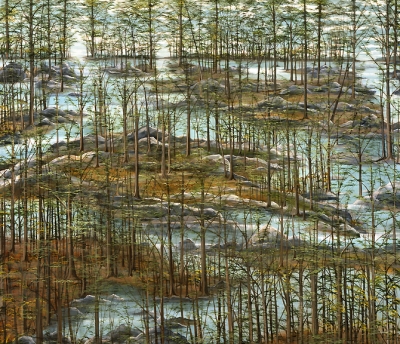 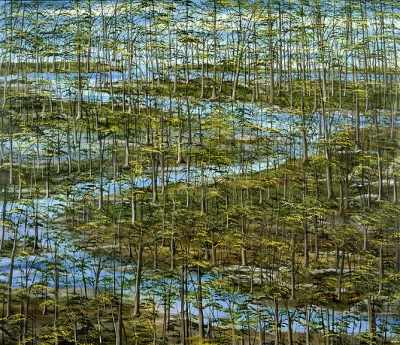 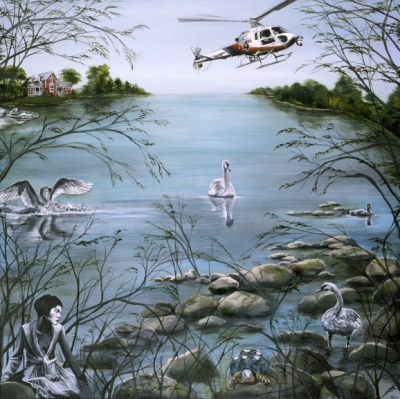 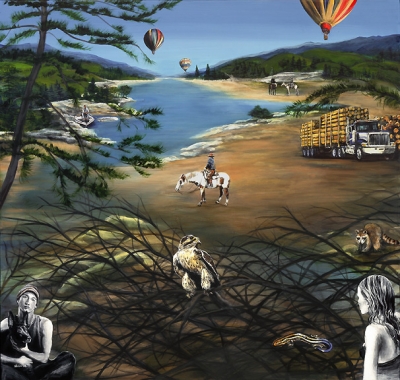 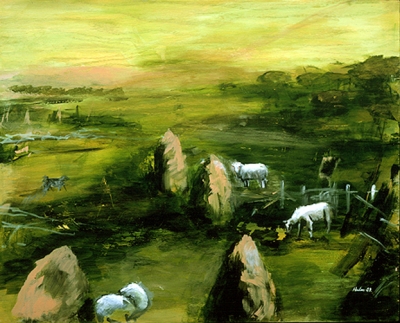 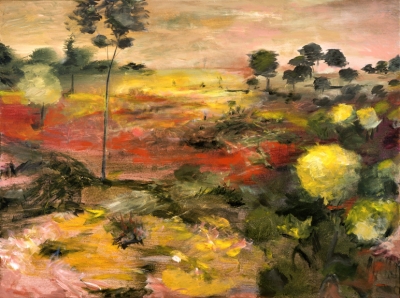 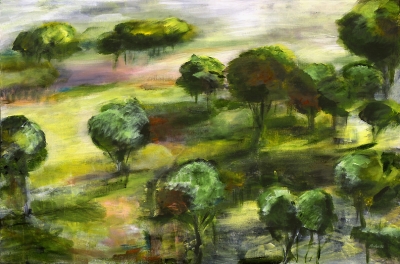 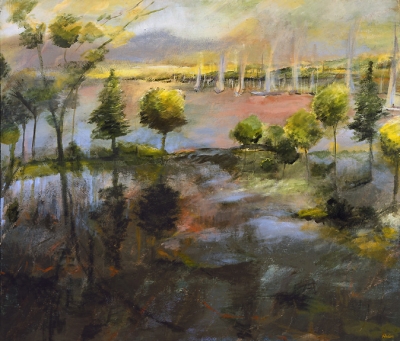 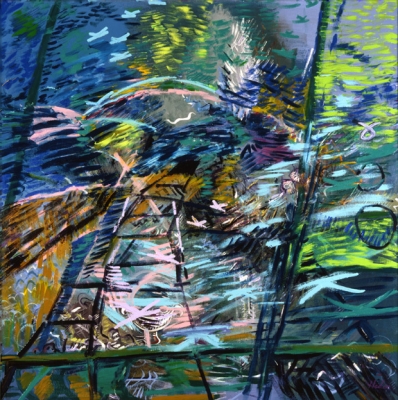 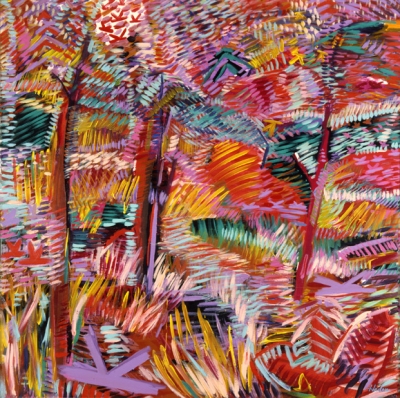 Born in Nashville, Tennessee (French mother/American father, raised bilingual, transatlantic childhood), Josephine Haden came to Washington, DC after living abroad in Paris, France.  Since graduating from Georgetown University (B.S.) she completed studies in art and art history at George Washington University (M.A.) and has been working out of her Northern Virginia studio where she now resides.

Josephine Haden’s paintings are included in private, public, and corporate collections in the United States and France, including the William J. Clinton Presidential Library and Museum, Little Rock, Arkansas.  Her paintings were shown in a solo exhibition at the Virginia Museum of Fine Arts (Richmond) in 2009.  She was awarded a Virginia Museum of Fine Arts 2008-09 Fellowship Award (Juror: Jeffrey Grove, Curator of Modern & Contemporary Art, High Museum of Art, Atlanta, GA).  Her paintings were also selected twice for publication in New American Paintings juried exhibition-in-print: in 2008 by Jenelle Porter, Associate Curator, Institute of Contemporary Art, University of Pennsylvania; and in 2006 by Alex Baker, Curator of Contemporary Art, Pennsylvania Academy of the Fine Arts.  Her work is featured in the exhibition-in-print competition Studio Visit (Open Studio Press, September 2008), juried by Carl Belz, Director Emeritus, The Rose Art Museum.  Ms. Haden was Grand Prize winner of the 1999 Binney & Smith Liquitex Excellence in Art Purchase Award.  In 1989, she was invited to show her paintings at the Grimaldi Château-Musée in Haut-de-Cagnes, France.

She was awarded Juror’s Prize by Vesela Sretenovic, Senior Curator of Modern and Contemporary Art at the Phillips Collection (DC) in the mid Atlantic biennial exhibition at the McLean Project for the Arts (VA); Juror’s Grand Prize by Judith Zilczer, Curator of Paintings at the Hirshhorn Museum (DC), in the 1992 Fairfax County Council of the Arts Open Exhibition; and Best in Show by Sidney Lawrence, Head of Public Affairs and Curator at the Hirshhorn Museum (DC), in the 1999 Artists Equity Show.  In other juried competitions, her paintings have been selected by prominent museum curators and art professionals:  in 2008 by Carl Belz, Director Emeritus, The Rose Art Museum (MA); in 2006 by Jack Rasmussen, Director the American University Museum at the Katzen (DC) and by David C. Levy, former Director, the Corcoran Museum, of Art (DC) and the Parsons School of Design (NY); in 2005 by Jonathan Binstock, Curator of Contemporary Art, the Corcoran Gallery of Art (DC), and by J. W. Mahoney, Art in America Corresponding Editor; in 2000 by Virginia Mecklenburg, Senior Curator, the Smithsonian’s National Museum of American Art; in 1999 by Eliza Rathbone, Chief Curator, the Phillips Collection (DC); in 1998 by Holly Block, Director, Art in General (NY); in 1997 by Susan Sterling, Chief Curator, the National Museum of Women in the Arts (DC); in 1996 by Howard Fox, Curator of Contemporary Art, the LA Museum of Art (CA); in 1995 by David Ross, Director, the Whitney Museum (NY); in 1994 by Donald Kuspit, renowned art critic (NY); in 1989 by Helaine Posner, Curator of Contemporary Art, the National Museum of Women in the Arts (DC); and in 1987 by Barbara Haskell, Curator of Contemporary Art, the Whitney Museum (NY).

To order any of Josephine’s work please complete the form below stating Josephine Haden’s name in the message area and I will contact you as soon as possible. Or call Judy Ferrara directly at 1-574-276-6001.