Arturo Mallmann’s abstract landscapes radiate a shiny gloss that makes them appear as glass canvases, but they are not in fact glass. Mallmann’s process includes a complicated approach of layering coat after coat of clear epoxy resin with acrylic colors between each layer that are translucent, allowing the colors to permeate through each layer as they build upon one another. 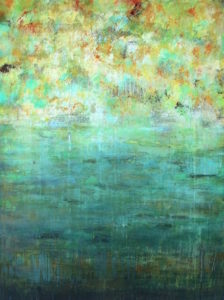 Mallmann’s landscapes do not afford the viewer entry into them to make you feel like you are part of the space. Rather, he depicts his subject matter from a faraway vantage point, forcing you to be a voyeur peering in on the scene taking place. The scene is typically comprised of a few people with an almost nomadic appearance walking across an uneven terrain whose destination is unclear. Perhaps this is intentional on Mallmann’s part to give the viewer the opportunity to imagine and create the subjects’ end points.

Mallmann does not incorporate people as subjects in all of his paintings, like A Place to Explore #1, for example. This painting illuminates the meeting point between water and the land that rests above, which blends seamlessly with the sky in which it resides. The colors are vibrant and the combination of greens and blues representing land and sky fuse together in such a way that results in an ephemeral effect. 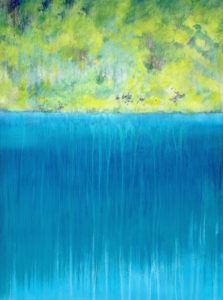 A Place to Explore #1

Some of his paintings also depict tropical environments, which pay homage to his childhood in Uruguay and Argentina. These paintings, like the one below, give the viewer a sense of tranquility that transport you to a state of serenity.