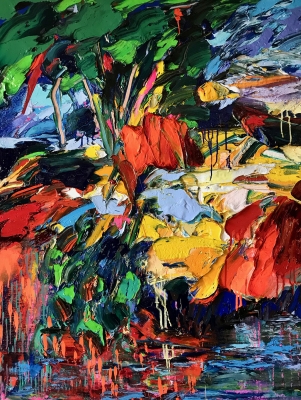 "Le Crépuscule" Oil on canvas, 51 x 28 in, (130x97 cm)
"Le Crépuscule" Oil on canvas, 51 x 28 in, (130x97 cm)
Gerard Stricher was born in 1948 to a family of artists in Sarrebourg, France. As a child, he
was already dreaming of becoming a painter and drew prodigiously. Self-taught, he
immersed in the café society of painters, attended gallery openings, and was encouraged by
sales but ultimately decided to enter industry. He became a highly regarded international
manager whose career and travels led him to become a ”World Citizen ”. Widening his horizon,
observing new people, different landscapes, and other realities, which gradually became
stratified in his unconscious to reappear later in his painting. He acquired an old mill in the
French Vexin, established his studio where he worked feverishly.
His exhibition in 2007 in Paris at the Espace Commines introduced him to collectors and
galleries. His American career took off in 2010 with an enthusiastic response at Expo Chicago with Bartlow Gallery. His work is
in many private and corporate collections including, Empire Bank in Springfield, Missouri, and the Pepsi-Cola Foundation of New York.


To order any of Stricher’s work, please complete the form below stating Gerard Stricher‘s name in the message area, and I will contact you as soon as possible. Or call Judy Ferrara directly at 1-574-276-6001.